I once had occasion to pick up some Mongolian vocabulary cards in Hohhot. After figuring out what the incredibly attractive but hard-to-understand letters meant, I noticed that while much vocabulary is the same in the two standard varieties of Mongolian (Chahar in Inner Mongolia, Khalkha in Mongolia), there are some obvious differences. Some are due to Chinese influence in Inner Mongolia, no doubt confirming the darkest suspicions of the Mongolians about their co-ethnics across the border. But there are also traditional dialect differences, and also later developments where the Inner Mongolians have sometimes developed better vocabulary than Mongolia itself.

The following are a just a few examples of differences that I noticed. 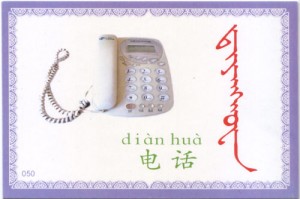 Given the aversion of Mongolians of Mongolia to pure Chinese vocabulary, this is the sort of word that is least likely to find its way into Cyrillic letters, but I’ll take a stab at it and transliterate it as диенхуа dieŋhua. This is from the Chinese word diànhuà (电话/電話) ‘telephone’ — although the word diànhuà itself was probably coined by the Japanese as denwa (電話). The Mongolian word for a telephone is утас utas ‘wire’, apparently abbreviated from телефон утас telefon utas ‘telephone wire’. Телефон telefoŋ, from Russian, is also sometimes used.

Although Inner Mongolian borrows its word for ‘phone’ from Chinese, surprisingly the word for mobile phone or cellphone is the same as in Mongolia, namely гар утас gar utas ‘hand phone’: 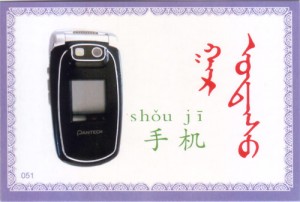 Other examples of Chinese influence are more subtle. The word for ‘bus’: 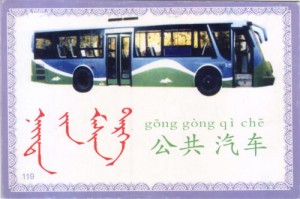 The Mongolians call a ‘bus’ автобус avtobus, again from Russian, although in normal conversation it has come to be pronounced more like автус avtus. (As a further twist, the Chinese model for the Inner Mongolian name is now becoming old-fashioned in Chinese, where gōngjiāo-chē (公交车/公交車) ‘public transport car’ seems to be becoming the favoured form.)

While it may seem that the Inner Mongolians are heavily influenced by Chinese, there is plenty of vocabulary where they use non-Chinese international vocabulary. For example, the computer: 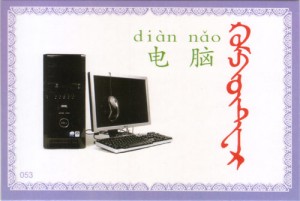 That very involved set of letters on the right actually spells out компьютер kompyuter, which is the word for ‘computer’ in both Mongolias. (Notice that the Chinese on the card uses the Taiwanese import diànnǎo (电脑/電腦)  ‘electric brain’ in preference to the recommended Mainland term jìsuàn-jī (计算机/計算機) ‘calculating machine’.)

In other cases the difference is due not to Russian or Chinese influence but to dialect differences in Mongolian itself. My favourite is the word for ‘apple’: 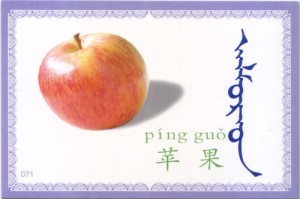 The word shown here is алмарад almarad, although this may be slightly bookish. According to dictionaries, in everyday life пингуо pinguo, from Chinese píngguǒ (苹果/蘋果), is often used. As a name for the apple, алмарад almarad is quite old. It appears in a mid-Qing dictionary as the Mongolian word corresponding to 蘋果 píngguǒ. It is related to Turkic words for the pear (cf Kazakh алмұрт almurt, Turkish armut).

The Mongolians of Mongolia and the Buryats, too, call this fruit алим alim, which is probably also a very old borrowing from the Turkic languages (cf Kazakh алма alma, Turkish elma, etc meaning ‘apple’). In Inner Mongolia, on the other hand, алим alim means something completely different: 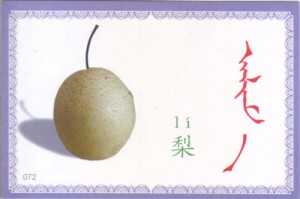 Yes, that is a pear that you see. Somewhere along the line apples and pears appear to have got reversed in Inner Mongolia.

In Mongolia itself, the pear is called лийр liir, which is ironic because лийр liir is clearly a borrowing from Chinese, maybe from lír (梨儿/梨兒) . In Mandarin it is now normally called lízi (梨子). This is a case where the Inner Mongolians are less sinified than the Mongolians!

While we’re on fruit, the word for banana is the international банан banaŋ in both Inner Mongolia and Mongolia: 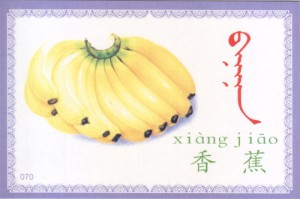 Another name for this is the preferred (although not necessarily most popular) term гадил gadil, for which I don’t have an etymology. And the Inner Mongolians also apparently use the Chinese word xiāngjiāo (香蕉) ‘banana’, pronounced сянжао syaŋjao. The fact that fruit has different names isn’t surprising. It is one area where many languages — Spanish is notorious for this, but English is certainly not immune — appear to have different local names.

Finally, a case where the Mongolian word is demonstrably inferior to the Inner Mongolian: 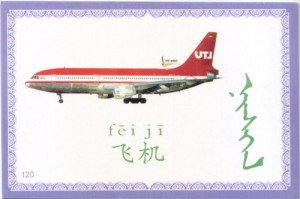 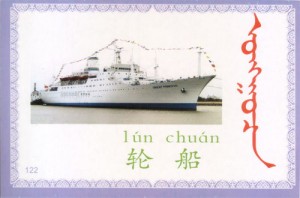 That’s right, the word онгоц oŋgots is the Mongolian word for a boat or ship. If by some not so far-fetched conjunction of circumstances they need to distinguish the two, Mongolians have a choice of using усан онгоц usaŋ oŋgots ‘water boat’ for a boat or хөлөг онгоц khölög oŋgots ‘ship boat’ for a ship. A plane can be (but is usually not) distinguished as нисэх онгоц niseh oŋgots ‘flying boat’.

By using нисгэл nisgel as a separate, sensible and quite transparent word for ‘aeroplane / airplane’, the Inner Mongolians have avoided this kind of confusion.

The Inner Mongolians use more Chinese loanwords, but that doesn’t mean the Mongolians (despite their self-image) don’t use them.

The Mongolians use a lot of Russian words (many more than is apparent from the above examples), but that doesn’t mean the Inner Mongolians don’t use them.

I LIKE THOSE CARDS. GOOD OBSERVATIONS. I GUESS YOU READ MONGOLIAN script.

The word юмор yumor also appears to be from Russian. Again it is strange that it’s not used in (Outer) Mongolia. Another interesting thing about юмор is the missing ‘h’. It is not only the Russian word юмор that lacks it; Chinese 幽默 yōumò and Japanese ユーモア yūmoa are both missing the ‘h’. I’m guessing the word entered these languages from French rather than from English…

My guess that it was from French was way off. I wasn’t aware of this, but the older British English pronunciation does not pronounce the ‘h’. The Russian is direct from the English. The Chinese and Japanese are possibly also modelled on the h-less pronunciation.

I agree those words are probably from Russian and I think via Outer Mongolia in maybe 1930s-1950s. Because during the time in Mongolia many people preferred to use Russian words, especially those words with communist connotation like ‘kadr’, ‘tovarishch’ and it was a time when (50s) Inner mongolia was copying everything Outer Mongolia did and sent students to Mongolia. They even briefly switched to cyrillic alphabet in the 50s and switched back to Mongolian alphabet later.

In Mongolia, people gradually avoided to use strong communist words and direct Russian words, starting 70s. I remember, in the 80s, there were campaigns to avoid to use Russian words. At the time I thought it wouldn’t be successful, but now I see success. At that time, everyone used creolized russian words like yavlag (yabloko) for apple/alim, galavsa (kolbasa) for hiam/sausage and it was thought funny if you said it in real Mongolian. Now, it’s the other way around.

In old Mongolian movies of the 50s, 60s, I heard movie characters saying ‘kadr’ a lot. Probably, in the 70s, the word was completely replaced by mongolian word.

But, I guess, there is still possibility that the word yumor (humor) came via Chinese language from English.

In Inner Mongolia, one often hear people describing a person to be ‘yumorlig’ meaning having a good sense of humor.

I was watching Inner Mongolian TV and heard saying “moraal’tai” (meaning good mannered.) which reminded me that I actually hear the word quite often by Inner Mongolians. The world “moraal” (moral) probably from Russian language and almost never used by Outer Mongolians.

Sorry, I'm now using Disqus for comments. If you'd prefer not to use Disqus, please send me an email and I'll list your comments separately. Thanks!